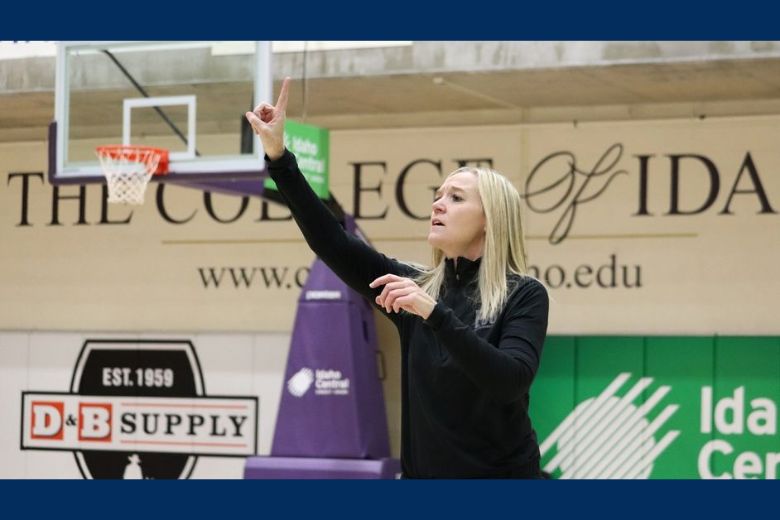 “I have been incredibly blessed through these last 23 years to coach some talented athletes and amazing women,” Weissenfluh said. “To look into the crowd today to see the stands filled with so many of our alums and their families means the world to me.”

The Mountaineers jumped out to an early lead and played a dominant first half, building a lead all the way up to 18 early in the second quarter. A large portion of the Mounties’ success came on the back of Shaelie Burgess who put together her best performance to date with a double-double scoring 20 points and hauling in 10 rebounds. Burgess also added three blocks on the defensive end coming after a seven-block performance a day ago.

The lead wouldn’t last as the Bearcats fought their way back into it in the second half taking their first lead of the game early in the fourth quarter. With Weissenfluh’s 500th win hanging in the balance, the Mounties responded with an 8-0 run to regain the lead. Eastern held on down the stretch taking a nine-point win.

Saturday’s bout with Willamette marks the last contest prior to conference play this season. Eastern is scheduled to begin CCC competition against Oregon Tech on Friday, Dec. 2. Tipoff is scheduled for 5:30 p.m.

Weissenfluh entered the 2022 season with a career record of 497-174. Just three wins away from 500 to start the season, Weissenfluh’s .741 winning percentage and 497 wins already made her the all-time winningest coach at Eastern Oregon University prior to reaching the 500-win mark today.

“I have always said it and I mean it again tonight, these are not my wins. They are program wins,” Weissenfluh said. ” This program couldn’t have reached this milestone without the amazing people who have bought into EOU and our basketball program.”

Her journey as Eastern Oregon’s head women’s basketball coach began in 2000 when she took over the program prior to the 2000-01 season. Going into year 23, her first season is her one and only season finishing under .500 and she has posted a winning season in each of the last 21 campaigns. Her winningest season to this point came in 2012-13 when she led EOU to a 33-3 record winning the CCC Regular Season Championship and Tournament Championship. That year the Mountaineers went undefeated in the CCC and made it all the way to the NAIA Quarterfinals.

Over her career Weissenfluh has led the Mountaineers to 11 Regular Season CCC Championships and six Tournament Championships. Along with those dominant conference performances she has also been at the helm of 13 teams that have made it to the NAIA National Tournament.

One key member that has been along side Weissenfluh on her way to 500 wins is Assistant Coach Tiffanie Ulmer. Ulmer has been at Weissenfluh’s side for 13 years helping win over 300 games and cementing herself alongside Weissenfluh as one of the most successful coaches in EOU history.

To this day, Weissenfluh is the only EOU women’s basketball coach to record 100 wins or more and has now officially won five times that amount.

“I can’t thank everyone enough for all of the unwavering support,” Weissenfluh said.