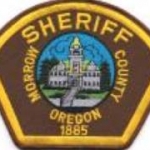 MORROW COUNTY, Oregon — On January 24, 2019 at 8:02 p.m. the Morrow County Sheriff’s Office received a 911 call reporting two males, Philip Mullins and Kim Martz of Heppner were stuck in the snow on Shaw Grade Road in south Morrow County.  Mr. Mullins reported they were approximately six to seven miles up Shaw Grade road and unable to get the vehicle unstuck or walk to safety.

A command post was set up at Willow Creek Road/Shaw Grade Road to stage, direct and deploy resources and personnel safely.  Sergeant Nathen Braun and Sergeant Todd Siex started searching from the command post on snow machines, Heppner Ambulance was put on standby and Lieutenant Terry Harper responded to assist.

At 10:21 p.m. Mr. Mullins was able to get through to dispatch and advised, “It is bad all the way and their rear differential was plowing snow and they didn’t realize it”.  Mr. Mullins advised they didn’t have any food and ran out of water but were able to stay warm in the pickup.  Mr. Mullins said they would stay in the pick up until they saw lights or heard the snow machines.

At 11:56 p.m. Sgt. Braun and Sgt. Siex located Mr. Mullins and Mr. Martz in the pick-up on Shaw Grade Rd.  Due to the waist deep snow and road conditions it was not safe to bring the two out on the snow machines.  At 1:18am local Heppner resident Thomas Wolff was able to respond and deployed his tracked snow UTV to assist in the rescue mission.

At 3:01 a.m. all subject involved were safely at the command post.  After confirming no medical was needed both subjects were driven to their residences and safely back with their families at 3:35 a.m.

All rescue units were safely accounted for and the incident was complete at 4:01am.

“This was a great team effort by all involved.  We would like to thank Morrow County Dispatch, Sgt. Braun and Sgt. Siex for a job well done.  Also thank you to Thomas Wolff for assisting with his tracked snow UTV.  Without his assistance this mission would have taken a lot longer,” said Morrow County Undersheriff and Emergency Manager John Bowles..