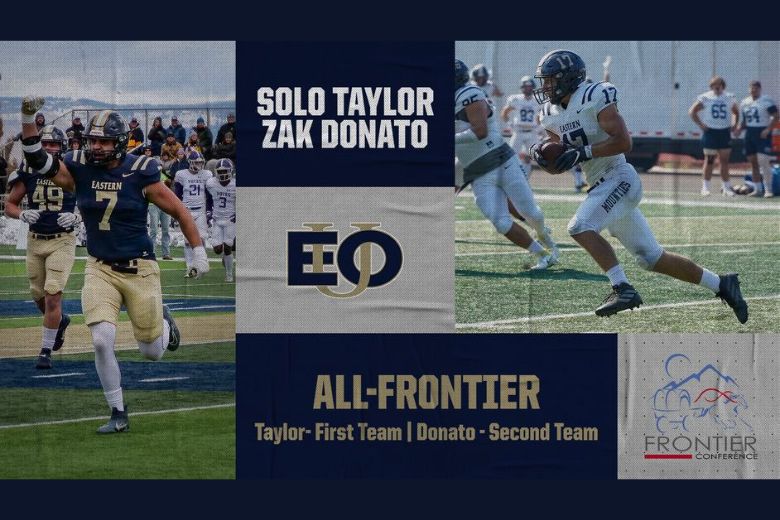 LA GRANDE – The Frontier Conference announced the 2022 all-conference football teams and NAIA Champions of Character selection on Monday. The Eastern Oregon University Mountaineers had two players make the list in Solo Taylor and Zak Donato. The teams are chosen in voting by the league’s coaches.

“I would like to thank and congratulate Solo and Zak for all the hard work and dedication this season. I am very proud that these two were chosen for All Conference awards,” Coach Tim Camp said. “I know how much time these two have put in and it really showed in their play on Saturdays.”

Taylor earned his third straight First Team All-Conference selection this year as a leader for the Mountaineer defense. In his final season the Rigby, Idaho native was second on the team in tackling with 69 total on the season. He also accounted for four tackles for loss and two-and-a-half sacks. In the turnover category, Taylor also picked up an interception and a forced fumble on the year. He was also named First Team All-Conference last season and in the 2020-21 shortened season.

Zak Donato earned his second All-Conference selection this season, his first came in the 2020-21 season when he earned First Team honors. This year Donato was named Second Team All-Conference after leading the team in tackling with 80 total takedowns. The senior out of Selah, Washington made an impact everywhere on the field this year for the Mounties picking up eight-and-a-half tackles for loss along with two interceptions, one forced fumble, and a fumble recovery.

“I know both these young men will continue to be leaders and inspire, making us all better and pushing our program to succeed,” Camp said.

Eastern Oregon’s selection for their team’s Champion of Character was junior running back, Nathan Reed.