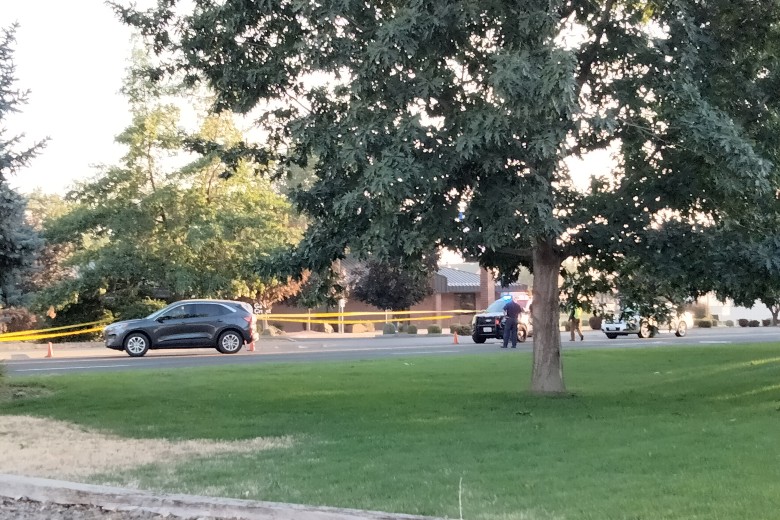 WALLA WALLA – Washington State Patrol trooper Dean Atkinson Jr. drove himself to the hospital after a suspect rammed his patrol car, then shot at him at 5:07 p.m. Thursday near Avery Street and West Poplar Street.

Trooper Sarah Clasen said the trooper remained conscious and alert after the incident, then drove himself a few blocks east to Providence St. Mary Medical Center. As of 8:30 p.m. Thursday, Clasen said the injured trooper was being airlifted to Harborview Medical Center in Seattle. WSP Chief John Batiste announced early Friday morning, he is now in stable condition.

Local law enforcement responded to the scene and secured evidence related to the incident. Several minutes later, Milton-Freewater police officers attempted to stop a vehicle matching the description from the shooting. Local law enforcement responded towards the Oregon state line and were involved in a short vehicle pursuit with the suspect before the pursuit came to an end on State Route 125 north of Stateline Road.

The suspect, Brandon Dennis O’Neel, 37, was taken into custody and transported to the Walla Walla County Jail where he was booked on allegations stemming from his suspected involvement in this incident which include attempt to elude police vehicle, first-degree assault and first-degree aggravated murder. State Route 125 was closed for several hours in both directions between Stateline Road (milepost 0) and Old Milton Highway (Milepost 1.6) due to the police investigation. It reopened around 4:30 a.m. Friday.

Clasen said the suspect had been contacted by law enforcement earlier in the day.

Walla Walla Police Chief Chris Buttice requested the assistance of the regional Special Investigations Unit to conduct an investigation of this incident. Any additional information will be released by the SIU as it becomes available.

Shortly after 9 p.m. Thursday, Washington Governor Jay Inslee issued this statement via Twitter: “Thank you to those who apprehended the suspect so quickly. Trudi and I join all those sending thoughts of comfort to the trooper who was able to get himself to the hospital. What an incredible feat of strength.”

“This evening we were once again reminded of how dangerous the profession of law enforcement can be when one of our troopers was involved in a critical incident while on duty in Walla Walla. We were also reminded of how strong and resolute our people can be when Trooper Dean Atkinson though seriously injured, found the strength to drive himself to the hospital. Trooper Atkinson is a five year veteran of the Washington State Patrol and I am both relieved and happy to announce he is now in stable condition.

Let me say thank you to the outpouring of support from the public.  I am sure it is and will be appreciated by Trooper Atkinson and his loved ones and indeed all of the men and women in law enforcement in our state.  Though there is certainly danger and cruelty in our world, there is also courage and grace, and for that we are thankful just as we are thankful for this fine young trooper’s service and survival.”