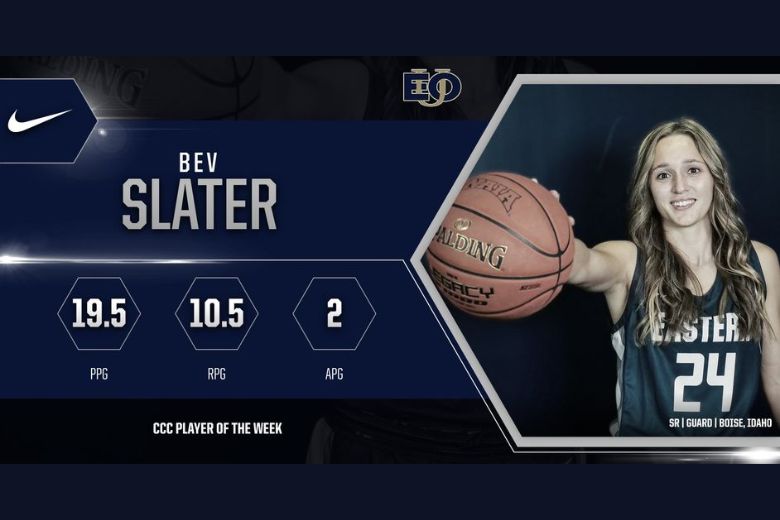 LA GRANDE – (Release from Eastern Oregon University)  Beverly Slater has been named the Rize Laboratory Women’s Basketball Player of the Week for her performance in the Les Schwab Invitational this past weekend. In the College of Idaho hosted tournament, the senior guard was dominant in all facets of the game playing a key role in the Mountaineers’ first two victories of the season.

“It was nice to see Bev back on the floor after having to sit out last year due to an injury,” Coach Anji Weissenfluh said. “She really stepped up and made some big time plays on both ends of the floor.”

To open the tournament, Slater put up 18 points in a win over Montana Tech to lead Eastern in scoring. She did so on an efficient 7-11 shooting. Her presence was felt in other areas of the game as well as she recorded a double-double with 13 rebounds, four coming on the offensive side of the court. Slater picked up two assists and a couple of steals as well helping lead the Mounties to a 21-point victory.

The following day Slater put together another strong performance breaking the 20-point barrier for the first time on the year scoring 21 points on 50 percent shooting. She was dominant inside once again racking up eight rebounds. The senior also dished a couple of assists for the second game in a row on EOU’s way to a 70-55 win over UC Merced.

Slater and Eastern return to action at the Best Western Caldwell Inn and Suites Classic hosted by College of Idaho this coming weekend. The Mountaineers are scheduled to play their first game against Montana Western on Friday at 1 p.m. MT. They will wrap up the tournament with another 1 p.m. tilt against Willamette the next day.