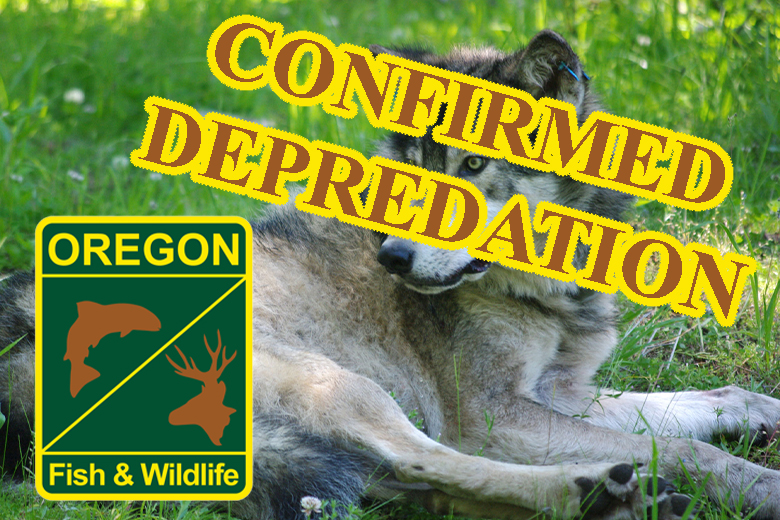 General situation and animal information: On the evening of 4/27/22, a livestock owner found the
remains of a six-week-old calf in a partially timbered 1200-acre pasture on public land. The carcass had
been largely consumed, with only part of the spine, a few ribs, and the pelvis with some hide remaining.
This carcass was located approximately 90 yards from the carcass of the second confirmed depredation in
this pasture and is estimated to have died near the same time as that calf (see April 27, 2022 – Wallowa
County [Crow Creek area]).

Physical evidence and summary of findings: There were trails of heavily trampled ground where the herd
of cows had traveled quickly down a ridge to the creek bottom where the carcass remains were found.
Wolf tracks were also found in the trails mixed with the cow tracks. The remains of the calf were skinned
and examined. Pre-mortem hemorrhaging measuring one inch long and ½ inch deep was evident in two
areas near the tail and one area near the spine. This bruising, combined with the disturbed ground, and
the nearby confirmed depredation, allows for using reasonable inference to confirm the death of this calf
as wolf-caused. This depredation is attributed to the Chesnimnus Pack

Cause of death/injury: Confirmed

General situation and animal information: On the evening of 4/26/22, a livestock owner saw eight wolves around the remains of a six-week-old, 180 lb. calf in a partially timbered 850-acre pasture on public land. The carcass was intact and the majority of the hide was present; most of the tissue was missing. The calf was estimated to have died within 24 hours of the investigation.

Physical evidence and summary of findings: The carcass was shaved, skinned, and examined. There were at least 20 pre-mortem bite scrapes on the hindquarters up to ¼ inch wide and two inches long. There were pre-mortem tooth scrapes and punctures on the hide near both elbows, including premortem hemorrhage and torn muscle 1¾ inches deep in the corresponding tissue. The size and location of bite wounds and severity of trauma are similar to those observed in other calves attacked by wolves. This depredation is attributed to the Chesnimnus Pack.