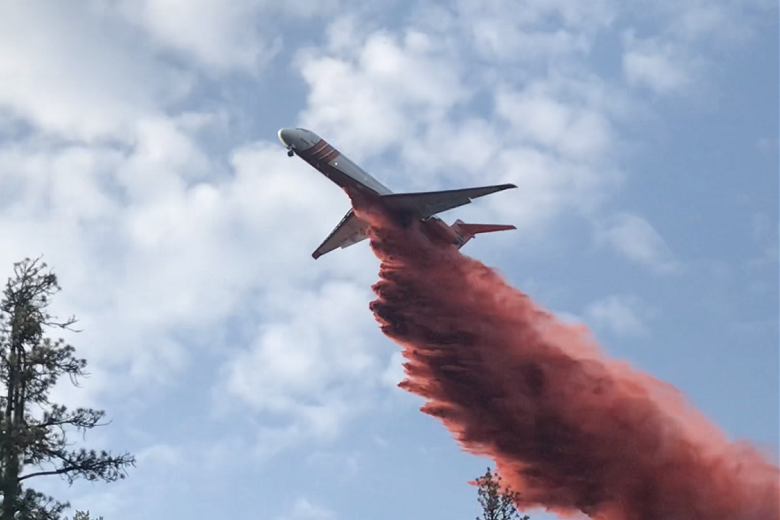 Resources battling Beech Creek Fire along US Hwy 395B

LONG CREEK -UPDATE (8/4): As of this morning, wildcad.net has reported the Beech Creek Fire near Fox has grown to 254 acres in size. According to the latest release from the Malheur National Forest, the fire was approximately 15% contained at last update. There is now a line around the fire in which firefighters are working to secure. They have started mopping-up, however continue to address flair-ups, with the assistance of the helicopter.  We’ll provide updates as they come in.

Find all releases and updates on this story below:

There were no significant changes to the Beech Creek Fire overnight, with a slight increase in area burned – now up to 248 acres, as the fire continued to spread toward the north, south and west. Firefighters continue active suppression and work with local landowners and permittees to share information and address concerns. Highway 395 is open with a pilot car from milepost 103 to milepost 106.5, approximately three miles. Expects delays and heavy fire traffic. The fire is 15% contained. The Pine Creek Fire remains at 1.1 acre and full suppression is ongoing. We are still expecting hold overs from lightning the last few days and will have our firefighters responding to those as well. A Red Flag warning is in effect from 12 p.m. until 9 p.m. this evening. Conditions remain hot and dry. Abundant lightning with strong gusty, erratic winds is likely. Although some storms will bring heavy downpour, there is a potential for new fire starts resulting from lightning. Our crews will be searching for hold overs from previous strikes.

UPDATE (8/2, 2:46 p.m.): According to ODOT’s Tripcheck.com, Highway 395-B is now open with expected 20-minute delays through the fire area. (The following is a release from ODOT): U.S. 395-B is now open between Mt. Vernon and Long Creek. Pilot cars are directing single lane travel through the fire-impacted area between mile posts 104 and 106 (about 15 miles south of Long Creek). Expect 10 to 20 minute delays as crews work to remove hazard trees and debris near roadway. The Beech Creek Fire remains active away from the highway. Check with Oregon Department of Forestry, the Malheur National Forest and Grant County for status of local roads in the area. Check TripCheck.com or call 511 / 800-977-6368 for state highway updates.

Multiple resources from the Malheur National Forest, Grayback Forestry, Inc., and the Oregon Department of Forestry (ODF) responded to a reported wildfire on Monday afternoon. Crews worked into the night concentrating on structure protection.
The Beech Creek fire has burned approximately 200 acres and is zero percent contained. U.S. Highway 395 is closed northbound and southbound between Long Creek at milepost 90 and Mt. Vernon at mile post 120 due to the fire on both sides of the road. The cause of the fire is undetermined and is under investigation.
“The safety of our firefighters and the public is our top priority” said Ron Simpson, Fire & Aviation Staff Officer. The Forest Service is continuing to work with its partners, ODF and Oregon Department of Transportation (ODOT) to re-establish power lost to downed power lines, open the highway, keep the fire from spreading on to private land and to protect private structures.
A wetting rain around 4 a.m. this morning moderated fire behavior but the hot and dry weather continues to accelerate the drying of fuels. Similar fire behavior is expected for today.
A Type 3 Team assumed command to at 9 a. m. this morning and are working to establish an Incident Action Plan, create maps and set up Fire Camp.

U.S. 395-B remains closed northbound and southbound between Long Creek at milepost 90 and Mt. Vernon at milepost 120, due to a wildland fire that burned on both sides of the highway near milepost 104.5. The route was closed yesterday afternoon and through the night. The fire has since moved away from the highway. ODOT is working with the fire incident command staff to assess when U.S. 395 will be safe for motorists. Current issues are hazardous trees, rocks and other debris that could impact travelers. Highway closure updates will be posted as information becomes available. Avoid this area and use alternate routes. It is unclear what local county, forest service or BLM roads are also impacted. Stay on main state highways if possible. Check TripCheck.com or call 511 / 800-977-6368 for update state route conditions. Outside Oregon call 503-588-2941. Check with Grant County, forest service agencies and BLM for non-state highway conditions.

The Grant County Sheriff’s Office was called to a report of multiple fire starts in the area of US 395 near mile post 105, near Fox Valley in the head of the Beech Creek drainage at 1:35 pm.

Nearby landowners responded and attempted to put out the fire on the west side of 395, but the fire grew rapidly.

The fire caused the transmission line to the Long Creek vicinity to be de-energized, putting that area out of power for the foreseeable future.

Several helicopters, multiple SEAT type aircraft, and heavy airtankers, a variety of dozers and hand and engine crews all attacked the fire limiting it to approximately 75 acres in size.

I want to thank all the crews that worked hard to contain this fire, and the citizens that stepped in and helped keep this event from becoming worse. Two residences evacuated were directly affected, and neighbors helped get livestock out of harms way.

The cause of the fire is under investigation.

At 2:08 p.m. on Monday, August 1st a power outage in the Fox/Long Creek area was reported affecting approximately 240 members. The cause of the outage is a wildfire now being referred to as the Beech Creek Fire. OTEC remains in good communication with authorities on the ground regarding the situation on the fire, and once we have been given word that is safe to access our infrastructure, we will begin the process of restoring power. We want to remind our member-owners that weather conditions and fire behavior make it hard to predict exactly when we will be able to begin that process, and they should prepare for a prolonged outage. If using a generator, please be sure to install it correctly. To learn more about safe generator usage or wildfire preparedness, follow this link: Wildfire Preparedness | Oregon Trail Electric Co-op (otec.coop)

We sincerely appreciate the efforts of fire fighters battling the blaze, and we apologize for this inconvenience. Thank you for your patience.

Beech Creek Fire. Fire crews are making progress and establishing lines. No fewer than 7 aircraft have been assigned to the fire. The fire progress has slowed significantly.

UPDATE FROM GRANT COUNTY EMERGENCY MANAGEMENT COORDINATOR ERIC BUSH (4:10 p.m.):”Winds are carrying the fire to the east, south east. Private property owners in the area are being contacted and assistance is being given to the protection of livestock and property. Fire fighting resources including ground and air crews are working the fire. Hwy 395 between Long Creek and Mt. Vernon is temporary closed and we ask that you avoid the area. Monitor this page for additional updates.”

UPDATE FROM ODOT ( 8/1, 3:17 p.m.) East. Ore.: U.S. 395-B is closed northbound and southbound between Long Creek at milepost 90 and Mt. Vernon at milepost 120 due to a wildland fire on both sides of the highway near milepost 104.5. The closure is likely to continue through the nighttime. Fire status is unknown at this time. ODOT is working with the forest service. Closure updates will be posted as information becomes available. Avoid this area and use alternate routes. It is unclear what local county, forest service or BLM roads are also impacted. Stay on main state highways if possible. Check TripCheck.com or call 511 / 800-977-6368 for update state route conditions. Outside Oregon call 503-588-2941. Check with Grant County, forest service agencies and BLM for non-state highway conditions.

All lanes of US 395B are closed between Mt. Vernon and Long Creek, according to Emergency Management Coordinator Eric Bush. This is due to the Beech Creek Fire. Use alternate routes away from all fire activity. The blaze is reportedly burning in grass, brush, logs and timber. Resources are on scene. Stay posted for updates.

PREVIOUS: GRANT COUNTY – Firefighting resources are responding to a location on Highway 395B between mileposts 104 and 108, just south of Beech Creek Summit. Wildcad.net has updated the incident to 1/10th of an acre in size. ODOT’s Tripcheck.com is showing 20-minute to 2-hour delays in the area. Stay posted, updates will be provided as they come in.