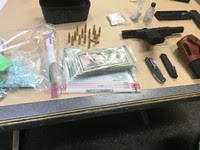 As a result of an anonymous tip, drug Agents identified Harper as a fentanyl distributor in Crook County and the central Oregon region. The initial investigation alleges Harper was importing controlled substances from the Portland area into Crook County.

Based on the investigation and several surveillance operations, CODE detectives applied for and obtained a Search Warrant for the rental car he was driving. Later the same day, Harper and his passenger, Justine Durham, were stopped by Crook County Sheriff’s Deputies, and the Search Warrant was executed.

During a search of the rental car, investigators located a commercial quantity of counterfeit pharmaceutical pills made of fentanyl, methamphetamine, and heroin. In addition to the controlled substances, a loaded pistol was also seized from Harper.

Harper was arrested and lodged in the Crook County Sheriff’s Jail with the following charges;

Felon In Possession of a Weapon

Durham was cited and released at the scene for being in possession of a controlled substance.

If you are aware of controlled substance violations in your community, please submit your anonymous tip through the DEA online tip-line HERE.