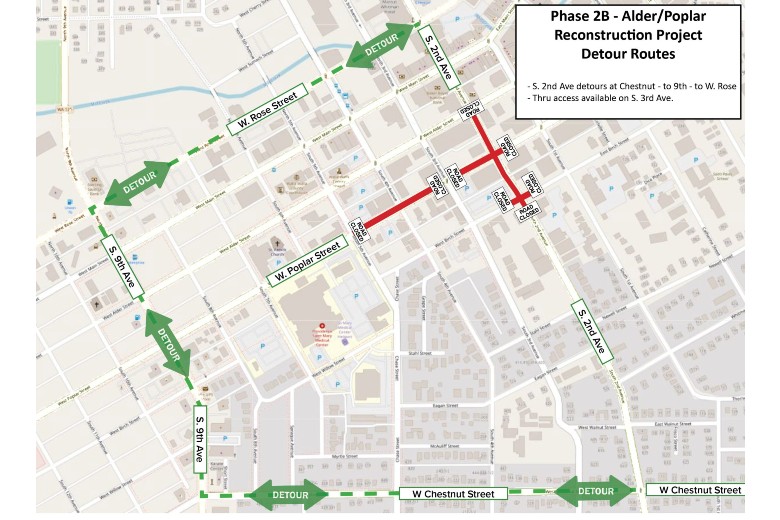 WALLA WALLA – The next phase of the Alder Street/Poplar Street reconstruction project has started. Poplar Street from South Second Avenue to South Fifth Avenue is currently closed. This phase of the project is estimated to take approximately three months to complete.

South Third Avenue will remain available as a detour route, although there will be intermittent closures. Poplar Street is closed to all through traffic; however, business access will be permitted during the closure.

The first phase of the project (South Second Avenue, Birch Street to Alder Street) is anticipated to be open to traffic in mid-July.

The estimated $8 million project reconstructs Alder Street from Merriam to Palouse, Poplar Street from Alder to Colville, and Palouse Street from Birch to the alley south of Mill Creek.  The three traffic signals at the intersections of Alder and Park, Alder and Palouse, and Poplar and Palouse, will be removed and replaced with roundabouts. Other improvements include replacing water, sewer, and storm systems, adding bicycle lanes, street lighting, and pedestrian accessibility and safety improvements.

Due to supply chain delays, the entire project may not reach completion until 2023. The city is working with the contractor on the construction schedule to determine if it will be possible to complete the project this year.