Pendleton down, Hermiston up in HS grad rates 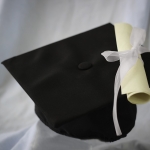 SALEM, Oregon – The Oregon Department of Education has released the state’s four-year high school graduation rates, which showed an increase on the state level. The two largest school districts in Umatilla County experienced different results. Pendleton saw a decrease, while Hermiston showed an increase. Hermiston is still lower than the state average of 78.7 percent and Pendleton is still above it.

At Pendleton High School, the graduation rate dropped five percent to 89.7 percent. The high school has one of the highest graduation rates in the state, and PSD Director of Curriculum, Instruction and Assessment Matt Yoshioka says they’re watching the drop, but not panicking.

“A one-year dip isn’t a trend,” he said. “We want to keep an eye on it. We don’t want it to become a trend. We want the direction to go the other way.”

Yoshioka was proud in a big upward jump by American Indian students. That demographic showed an increase of 16 percent. Graduation rates at Nixyaawii Community School and Hawthorne Alternative School both figure into the 2017-2018 overall figures. The grad rate for the entire district is 81 percent. It was 83 percent in 2016-2017.

He said the real work to be done is at the alternative school level.

“The most concerning thing for me is that our drop-out rate increased, and it is above the state average,” he said. “We want to look a lot closer at that, especially at Hawthorne Alternative School, to keep an eye on  how those students are doing and seeing what we can do differently there.”

Yoshioka said the district increased staffing at the alternative school this year, and is working to give students online learning options and the ability to take some classes at PHS.

The graduation rate in Hermiston leaped to 74.2, an increase of 8.3 percent over the previous year. The district also increased its four-year completer rate to 87.47 percent, which includes students who earned an extended diploma or GED in addition to those who earned a standard or modified diploma.

“This increase is reflective of the hard work of our staff and students,” Superintendent Tricia Mooney stated in a news release. “While we still have room for growth, it is exciting to see efforts paying off.”

Mooney said she looks forward to continued gains due to the collaborative efforts of the students, staff and parents.