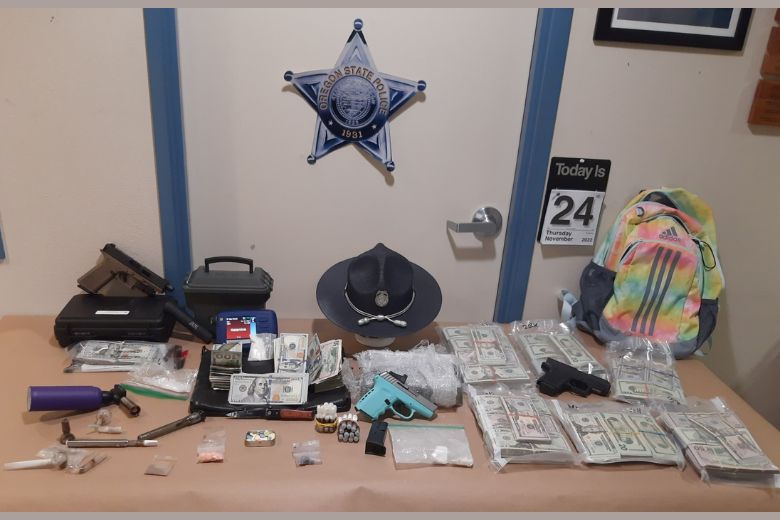 MALHEUR COUNTY – (Release from the Oregon State Police) On Thursday, November 24, 2022, at approximately 12:04 A.M. an Oregon State Police Trooper from the Ontario Area Command stopped an SUV for dangerous and erratic driving behavior on U.S. Highway 95 near milepost 1.  While the Trooper was in contact with the driver, the driver showed signs of impairment and the Trooper observed signs of other criminal activity.  The driver consented to field sobriety tests and further indicators of impairment were observed. The driver was subsequently taken into custody without incident for Driving Under the Influence of Intoxicants. A vehicle search was conducted incident to the DUII arrest. The vehicle search revealed a loaded firearm and approximately 1 kilogram of cocaine.  The passenger of the vehicle was then taken into custody without incident.

The vehicle was then seized, and a search warrant application was made.  After the search warrant was granted by a Malheur County Circuit Court Judge, a second more in-depth search of the vehicle revealed other controlled substances, two additional firearms t, a firearms silencer, and $151,910.  The other notable controlled substances seized included approximately 23.8 grams of suspected methamphetamine and 18 grams of suspected ketamine.

The driver was identified as Scott Anderson (49) from Costa Mesa, California and the passenger was identified as Jacob Flora (46) from Huntington Beach, California.  Both subjects were lodged in the Malheur County Jail for Unlawful Possession of a Firearm, Money Laundering, Unlawful Possession of Methamphetamine, and Cocaine – Commercial Drug offenses.

The Oregon-Idaho HIDTA program is an Office of National Drug Control Policy (ONDCP) sponsored counterdrug grant program that coordinates with and provides funding resources to multi-agency drug enforcement initiatives, including the OSP-DHE Initiative.