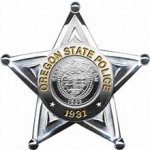 HERMISTON, Oregon – The Oregon State Police will be issuing a citation for a traffic violation to Morrow County Sheriff’s Deputy Lance Bose, 25, of Boardman. OSP Sgt. Seth Cooney says Bose will be charged with failing to maintain his lane of travel in a crash on Bombing Range Road at Milepost 13 Tuesday afternoon.

“People who travel Bombing Range Road know it is just simply a very long, straight road,” Cooney, of the OSP Hermiston Worksite, said. “It’s one of those roads that people can tend to lose their attention span.”

The new Dodge Charger was totaled after flipping onto its top and striking a power pole. Bose suffered what Cooney described as a minor injury, and was taken by ambulance for treatment at Good Shepherd Medical Center.

Cooney said there was no threat to anyone’s safety other than the driver’s, but there was property damage.

“We all have the same culpability involved, whether it’s a violation or a crime,” Cooney said. “We’re going to treat him as we would treat anyone else.”

Cooney said the investigation into the crash did not turn up any reason to believe that Bose was distracted by use of an electronic device, and there was absolutely no indication that he was driving under the influence of any intoxicants.

“He probably just fell asleep,” Cooney said, adding that the road can have a mesmerizing effect on motorists.