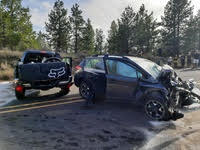 This crash is still under investigation. OSP is seeking public assistance from anyone who might have witnessed this event and they are encouraged to contact OSP at 1-800-452-7888 or *OSP (*677). Please reference SP22-078481.

OSP was assisted by the Deschutes County Sheriff’s Department, the Oregon Department of Transportation, and Bend Fire & Rescue.