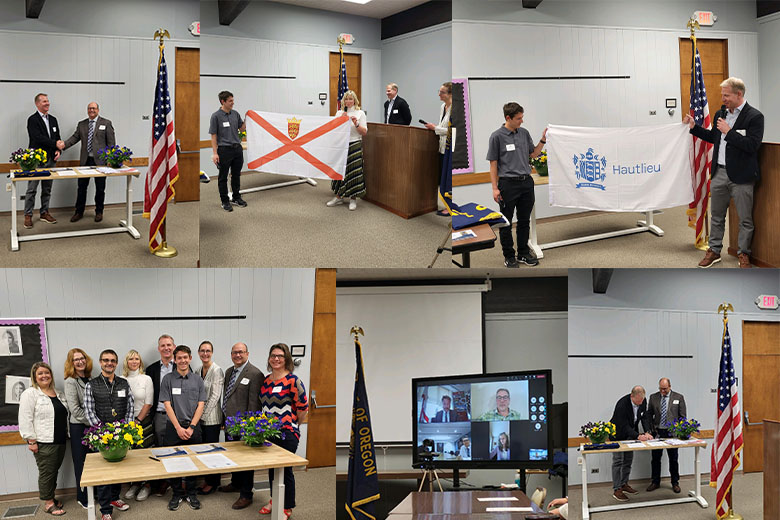 BAKER CITY – This week, a signing ceremony took place at the Baker School District 5J’s District Office in Baker City, Oregon, where representatives of the Government of Jersey and Hautlieu School joined representatives of Oregon International School to sign a Memorandum of Understanding (MOU) that solidifies their sister-school relationship.

Lee Campbell, Assistant Head Teacher of Hautlieu School, and Rachel Baxter and Kirstie Williams, Senior Advisors of the Government of Jersey’s Children, Young People, Education, and Skills Department, traveled from the Isle of Jersey to be present at the signing in Baker City.

In addition to signing the formal MOU, representatives signed a Certificate of Appreciation and Partnership that read, in part: “This certificate commemorates the official signing of a Memorandum of Understanding between the students and educators of Baker School District 5J and their new sister-school partners at Hautlieu School of St. Savior, on the Isle of Jersey.

The undersigned stand committed to a long-lasting collaboration between our schools; one underpinned by our common commitment to the academic success of all students as they prepare to take leadership roles in an ever-connected global community.”

In a press release made today by the Government of Jersey, Minister for Children and Education, Deputy Scott Wickenden, said, “This is an exciting opportunity for our students to experience a different culture and educational setting…We look forward to welcoming the students from Oregon when they arrive in September.”

Superintendent Mark Witty echoed many of the same sentiments. “We look forward to all the opportunities this collaboration will afford,” he said. “These relationships support an education of excellence for the future generation, with wide-reaching benefits we are excited to watch unfold.”