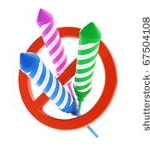 WALLA WALLA, Washington – Independence Day is next Thursday, and fireworks mean fun to many people. For some, however, pyrotechnics can be a source of stress, especially for anyone suffering from PTSD because the explosions can serve as a trigger.

Recently, the issue of fireworks being set off within Walla Walla city limits was brought up to the Walla Walla City Council as being inappropriate and inconsiderate as it scares animals and affects those suffering from PTSD. That’s being taken into consideration this year.

“Currently the city code limits the kinds and types of fireworks to those that aren’t the big exploding ones that go real high in the air and make lots of noise,” Walla Walla Deputy City Manager Byron Olson said. “What we found is that everybody is probably willing to accept a little bit of noise but there becomes that fine line of when is it too much noise and interrupting people’s ability to sleep and interrupting their family life.”

Olson said the council wanted more attention to be paid to that, so this year in there will be teams of one police officer and one firefighter on patrol.

“The firefighters will be responsible for identifying if any of the fireworks being used are not legal within the city of Walla Walla,” Olson said. “The police officer is there if somebody actually needs to be cited for that.”

Olson adds it’s so easy to go elsewhere and purchase fireworks and while they may be legal in another location, they may not be legal in Walla Walla. Legal and illegal fireworks in Walla Walla are outlined at https://wallawallawa.gov/government/fire-ambulance/fireworks.