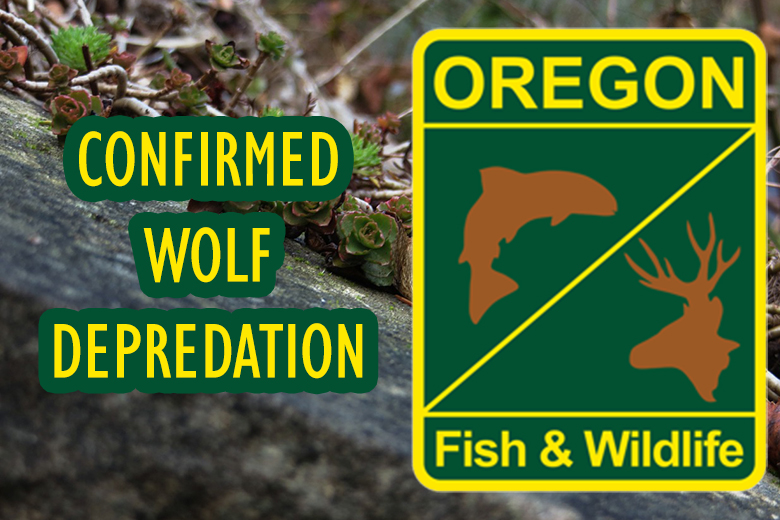 WALLOWA/BAKER/GRANT COUNTIES – (Release from ODFW) Today the Oregon Department of Fish and Wildlife released information on three Wolf Investigation reports that have taken place over the last couple of months.  Those reports can be found below.

General situation and animal information: On the afternoon of 4/25/22, a livestock owner found the remains of a 2-month-old, 170 lb. calf in a privately owned 850-acre pasture. The carcass was intact except for feeding at the stomach. The calf was estimated to have died 24-48 hours prior to the investigation.

Physical evidence and summary of findings: The carcass was shaved, skinned and examined. There were more than 20 pre-mortem tooth scrapes on the hindquarters and below the anus up to ¼ inch wide and 2½ inches long. Underlying tissue trauma and hemorrhage extended up to an inch deep. There were pre- mortem tooth punctures on shoulders and elbows, including tissue damage 1¾ inches deep. The size and location of the bite wounds and severity of trauma are similar to those observed in other calves attacked by wolves. This depredation is attributed to the Chesnimnus Pack.

General situation and animal information: On the evening of 3/28/22 a producer found an adult, approximately 130 lb. alpaca injured within its enclosure. The producer euthanized the alpaca and moved

it away from other stock. ODFW was contacted and inspected the carcass on 3/29/22; the injuries were estimated to be from the day prior to the investigation.

Physical evidence and summary of findings: The intact carcass was shaved, skinned, and examined. One premortem bite puncture was observed on the side of the head, and a single premortem bite tear was observed on the top of the head, with associated muscle tissue trauma in both locations. There was muscle trauma on the left side of the neck and bruising in the hide, but no observable tooth scrapes on the hide in this location. There was also a single premortem tooth scrape on the back of the right hind leg near the anus with shallow associated tissue bruising. The location and number of tooth marks are not consistent with wolf attack injuries on livestock.

General situation and animal information: On the afternoon of 3/16/22 a livestock producer found the remains of a one-day old calf in a private land pasture. The carcass was mostly consumed with the hind quarters missing from the scene. The calf had died the preceding night.

Physical evidence and summary of findings: The remaining hide on the head, front quarters, back, and flanks were shaved and skinned. There were no premortem wounds indicating a predator attack.

Evidence typical of scavenging by coyotes was observed on the carcass. No evidence was found on the scene or carcass to suggest the death was wolf related. Due to the lack of hide and muscle tissue on the carcass, the determination is possible/unknown.