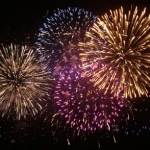 The following is a news release from Pendleton Rotary Club:

The Pendleton Whisky Music Fest is adding to its growing portfolio of community events by joining with the Pendleton Rotary Club to sponsor the annual Fourth of July Rotary Fireworks Show. Stadium Entertainment LLC, the parent company of the music fest, has made a generous $15,000 pledge to fully fund the annual firework display in Pendleton.

Pendleton Rotary Club President George Murdock said founders Andy McAnally and Doug Corey have made a commitment to not only continue growing the popular music fest that drives a significant amount of tourism to Eastern Oregon, but also to use the benefits of the Pendleton Whisky Music Fest to make a profound impact to the community it calls home.

Also known as Party in Pendleton, the music fest has continued to see significant growth each year which began in 2016 with Zac Brown Band headlining the inaugural event. As the Pendleton Whisky Music Fest has grown in popularity, so too has its ability to expand its impact on the community. Andy McAnally, co-organizer of the event said, “The community of Pendleton shows tremendous support for the annual music fest and funding the firework show is another way for us to show our appreciation and give-back to the community we all love.”

Stepping up with the offer to sponsor the fireworks show is yet another step along that path.

A year and a half ago, Rotarian Jerry Imsland, struck by Pendleton’s loss of a sponsor for the annual fireworks display, approached his Pendleton Rotary Club about taking on the project.  Imsland had been inspired by the actions of Pendleton student Devan Driskell who offered to donate $1,000 from his paper route in order to help restore the annual fireworks show after it lost a series of sponsors.

The Rotary Club gave Imsland the go-ahead, and made the first contribution, and he went to work finding sponsors for the 2018 show which was no easy task since a lack of sponsors had been the cause of the disappearance of the annual firework show in the first place.

Imsland, who volunteered to chair the event for a second year, was approached by Corey and McAnally to discuss the possibility of the Pendleton Whisky Music Fest stepping up and funding the popular firework display, which is enjoyed by the entire community of Pendleton.  The Pendleton Whisky Music Fest had already been working with the Rotary Club on a concession effort that results in the presentation of an annual $2,000 college scholarship.

According to Imsland, “The entrepreneurs were enthused by the possibility of making the month of July even more exciting for the Pendleton area.”

The Pendleton Whisky Music Fest had already grown from its 2016 beginning with the addition of a Kickoff Party on Friday night in downtown Pendleton moving from a one-day event to an entire weekend of festivities.  Doug Corey stated, “Growth of the annual event has been made possible from the support we receive from our loyal sponsors and the community believing in our ‘Party in Pendleton’ vision.”

Murdock said that without the initial commitment from Driskell and the willingness of Jerry Imsland to take on responsibility for making sure there was a 2018 fireworks show; this latest development would likely never have happened.

“It just shows what someone who is committed and willing to take something on can accomplish,” he said.

The Pendleton Rotary Club is very grateful to both Devan and Jerry for getting this going and now to Andy, Doug and Stadium Entertainment for their willingness to make sure it has the financial stability to keep going. The club had already recognized the pair for the impact of Pendleton Whisky Music Fest to the economy of the community and for allowing the club to participate as a vendor to earn money for scholarships.

On Friday January 18, at the annual Pendleton Chamber of Commerce Awards Celebration, Doug Corey accepted the Tourism Excellence Award on behalf of the Pendleton Whisky Music Fest. In accepting the award, he issued “a big thank you to our sponsors, investors, the City of Pendleton, Pendleton Round-Up Association, Happy Canyon Company, the local community and our loyal music fest fans for helping make the Pendleton Whisky Music Fest a success. None of this would be possible without their support.”