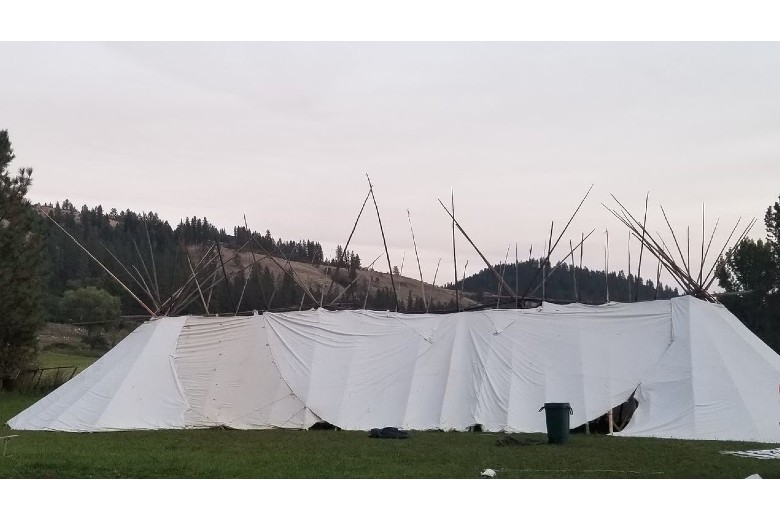 WALLA WALLA – A plateau long tent is coming to Whitman College’s Ankeny Field, made possible by a partnership with the Confederated Tribes of the Umatilla Indian Reservation and the Whitman Mission National Historical Site. The long tent will be open for visitors to take part in presentations from Monday through April 24.

The long tent is distinct to Native American tribes of the Columbia Plateau. Traditionally, it is used as an extended-family dwelling or community structure for lodging, social, ceremonial, and religious activities at different times of the year. The long tent constructed at Whitman College will be for educational rather than ceremonial purposes, with certain courses spending class time inside the long tent.

“In modern times, you infrequently see the long tent architecture set up for only special events, and only in the reservation communities,” Roger Amerman (Choctaw), a 1980 Whitman graduate and co-director of the event said. “This will probably be the first and last time Whitman College students will see a long tent.”

An opening ceremony following the construction of the long tent will be held Monday at 4:30 p.m. Tribal leader E. Thomas Morning Owl (Umatilla and Kainai) will be the CTUIR’s elder in residence, while Hereditary Chief of the Waluulapam (Walla Walla people) and CTUIR Executive Director Donald Sampson will lead the opening ceremony. Dignitaries and elders from the local plateau tribes such as the Cayuse, Nez Perce, Umatilla, and Walla Walla will also participate, including Kat Brigham, chairwoman of the CTUIR Board of Trustees.

Portions of some events may not permit filming or recording. Guests are asked to be respectful of speakers’ requests to put phones and cameras away. Visit https://www.whitman.edu/provost/initiatives-and-planning/the-long-tent for a full event schedule.