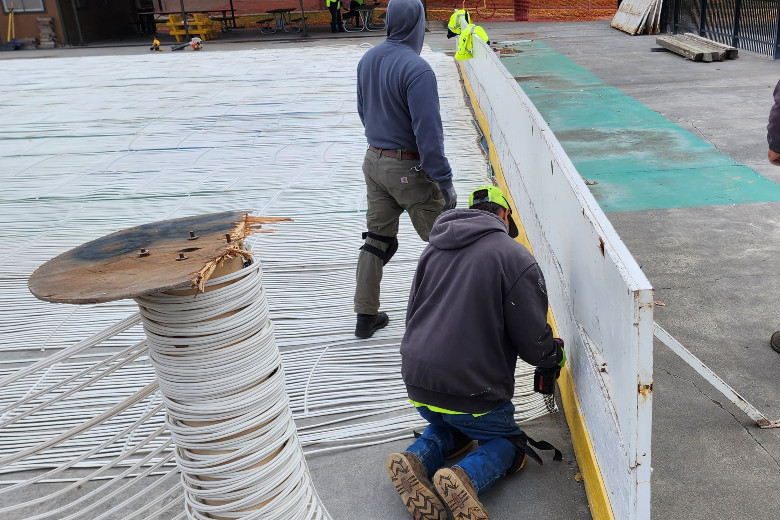 PENDLETON – The ice rink at Roy Raley Park usually opens to skaters the Saturday after Thanksgiving. That will not be the case this year. A mechanical failure during the start-up process has forced a delay. Pendleton Parks and Recreation Director Liam Hughes said if everything goes according to plan, the rink will open on Friday, Dec. 2.

City workers are awaiting the arrival of parts to repair a vital pump. Hughes said that’s essential to build the ice.

“The ice rink stays frozen by pumping refrigerant through a system of small tubing under the ice sheet,” he said. “Therefore, the first step every year is for staff to assemble the intricate web of tiny tubes and connect it to the chiller. This takes multiple hours with four or five staff crawling around on their hands and knees and hauling giant spools of tubing. The system is then charged with glycol and pumped through the chiller. It is that pump that failed on initial startup this year, causing us a slight delay while the pump is repaired.”

Hughes said that once the pump is operational, the process of building the ice begins. It’s a time-consuming operation.

“The initial step is a layer of base ice that has an additive that functions like corn starch to thicken the water into a white paste that forms the base layer,” he explained. “Next comes the slow, tedious part of building ice, consisting of spraying a light layer of water on the ice, waiting 20-40 minutes for it to freeze and repeating. Depending on the weather, this can take around a week to build enough layers for the ice rink to be able to open. Often, staff or volunteers from the hockey club work late into the night since the ice builds faster without the sun warming it up.”

Pendleton Parks and Recreation will post updates on its Facebook page and at the rink itself with the latest information about opening. More information about the rink and its regular hours of operation is available at https://pendletonparksandrec.com/parksrec/page/roy-raley-ice-rink.