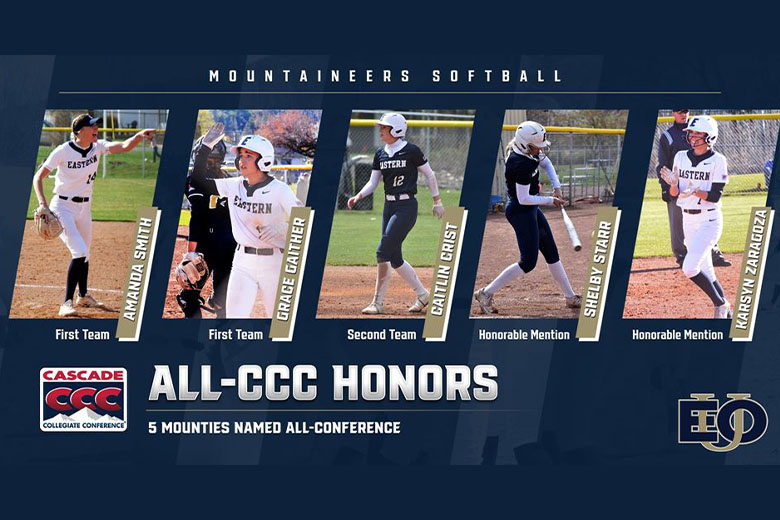 Garnering All-CCC honors for Eastern Oregon was Amanda Smith (Pitcher), Grace Gaither (Infielder), Caitlin Crist (Infielder), Shelby Starr (Outfielder), and Karsyn Zaragoza (Outfielder). The group of five players were key parts in the Mounties going 39-13 overall in the regular season and 24-6 in CCC action. The team’s 39 wins is currently the second most in a single season in program history and they are just two away from tying for the record.

Smith and Gaither were named to the First Team, while Crist was the lone Second Team selection. Both Starr and Zaragoza were tabbed as Honorable Mention selections. The five selections is the most under third year bench boss Nicole Christian and the Mounties have now totaled eight selections under her. No All-CCC teams were named in 2020 in Christian’s first year as head coach due to COVID-19 canceling the season.

Smith has been a force in the circle all season in her senior campaign. The left-handed pitcher is ranked in the top-five of the CCC in nine categories and leads the team in every major statistical pitching category. In the CCC, Smith is second in ERA (1.73), wins (17), and opponent batting average (.191). She is third in strikeouts (120), saves (3) and complete games (17); fourth in innings pitched (149.1) and shutouts (5); fifth in appearances (28). She threw her first career no-hitter back on April 1 in an 11-0 win over Warner Pacific in five frames. She was named CCC Pitcher of the Week twice this season. For Smith, this is her second career All-CCC honor and her first as a member of the First Team.

Gaither has been a staple in the Mounties batting lineup and at third base defensively. The junior in her first season with EOU is currently batting .301 and has started all 52 games this season. She has knocked 24 RBI, scored 27 runs, and hit four home runs so far this season. She is slugging .480 and boasts an on-base percentage of .392. She has hit 13 doubles and also drawn 22 walks. Defensively, Gaither sports a .914 fielding percentage and has helped turn one double play this season. She is tied for sixth in the league in doubles hit and is tied for seventh walks drawn. She was named CCC Player of the Week once this season and this is her first career All-CCC honor.

Crist also established herself in the Mounties lineup early on in the season. She has appeared in all 52 games and started 50. She bats .304 entering the postseason and is the team leader in home runs hit with sixth so far. She is tied for the team lead in RBI with 30 and has scored a team-high 41 runs this year. She has knocked 11 doubles, is slugging .488 and has an on-base percentage of .372. Crist also leads the team in stolen bases with 23 on 27 attempts. Defensively, she has a .953 fielding percentage and has helped turn four double plays. She ranks sixth in the CCC in stolen bases and is tied for eighth in runs scored. This is Crist’s first career All-CCC honor.

Despite missing a few games during the season, Starr was a reliable option at the bottom of the batting order for the Mounties and was a consistent presence in the outfield, predominantly in right. She currently leads the team in batting with a .327 average through39 games played. She has started 38 of those contests. Starr has hit 15 RBI, scored 16 runs, and knocked four doubles. She has a clean fielding percentage of 1.000 and has helped turn one double play. For Starr, this is her first career All-CCC honor.

Zaragoza has also been a reliable option in the outfield for the Mounties, primarily in center field. She has appeared in 50 games and started 49. She is batting .301 entering the weekend with 31 runs scored, 21 RBI, and has hit one home run. Zaragoza has drawn a team-high 26 walks this season and has an on-base percentage of .427. She is also 3-4 in stolen bases. Defensively, she has a .924 fielding percentage and her 26 walks drawn are tied for fifth most in the CCC. For Zaragoza, this is her first career All-CCC selection.

The Mountaineers enter the CCC Championships, presented by U.S. Bank, as the No. 3 seed and will face sixth-seeded Corban at 11:30 a.m. Hosting the tournament will be CCC regular season champion Oregon Tech. Should the Mounties win game one, they will face No. 2 seeded Southern Oregon at 4:30 p.m. that same day. A full preview will be released later this afternoon.