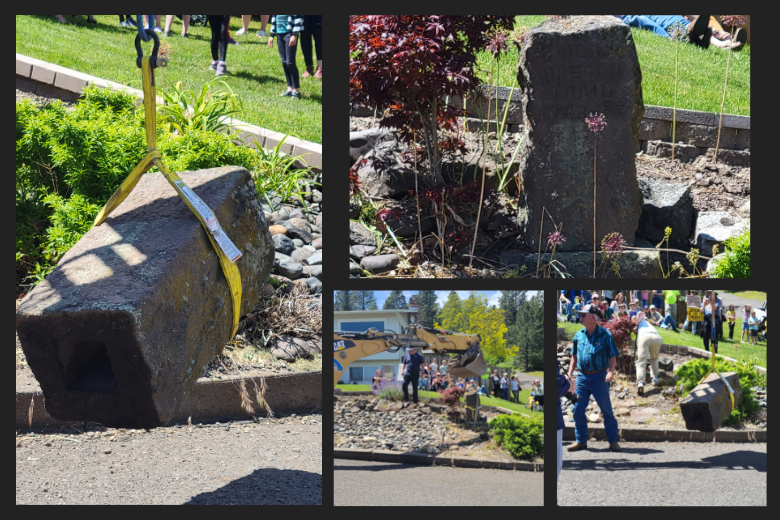 Ezra Meeker Monument revealed no time capsule like had been hoped

LA GRANDE – Yesterday afternoon a crowd of people gathered on the corner of B Ave and Walnut in La Grande; the location of a marker placed by Ezra Meeker in 1906.  Meeker is known as an American pioneer who traveled the Oregon Trail by ox-drawn wagon as a young man, migrating from Iowa to the Pacific Coast.

Dennis Larson with the Ezra Meeker Society gave the crowd some history on Meeker noting that, at the age of 75, Meeker traveled from Seattle heading east over the Oregon Trail, wanting the memory of what his generation had accomplished not to be lost. And he also wanted the trail marked because it was disappearing.

In 1906 Meeker made his way to La Grande where he met with city officials and asked to dedicate a monument.

The monument stone was quarried on Strawberry Mountain.

When the monument was placed, Meeker, who was accompanied by about 600 school kids and equal number of adults, had the children place rocks around the monument so they too could have ownership in it.

According to Larson there are records suggesting that in a journal that Meeker kept, he had written in it that in 1906, a time capsule, six inches by six inches, was placed inside the monument.  However, as of prior to 1pm yesterday afternoon it was unknown if there was in fact anything in the monument or not.

Crews with City of La Grande were on hand to remove the monument from its home, carefully and safely, in order to take a look and see if there was or wasn’t a time capsule inside.

Unfortunately, once the monument was moved, it was clear that there was no time capsule there.  The crowd gave a collected sigh of disappointment at this discovery. Ronnie Allen of La Grande, who spearheaded this project made the decision that no matter what, there would be a time capsule placed in that location for future generations.