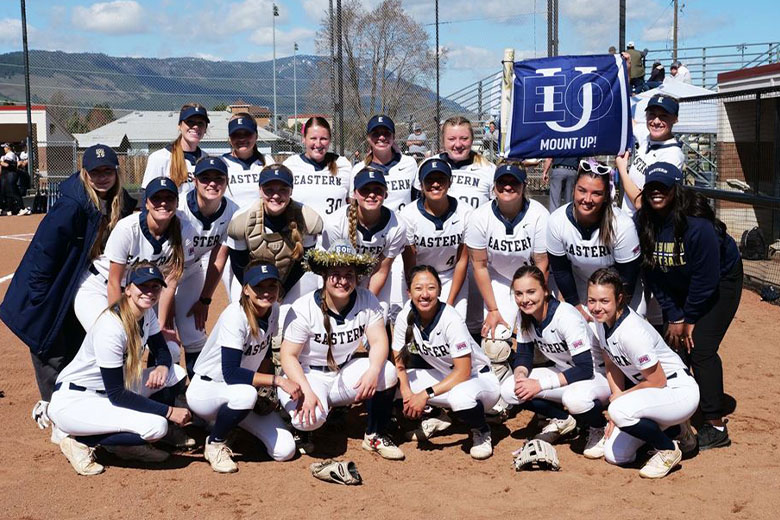 By Shannon McKone on Thursday, May 12th, 2022 in More Top Stories

LA GRANDE – (Release from EOU Athletics) No. 15 Mountaineers Softball is going dancing! Eastern Oregon University received an at-large bid as the NAIA announced its field of teams for the opening round of the 2022 National Championships.

The Mountaineers (41-15) earned a No. 2 seed and will head to Oklahoma City, Oklahoma to face the No. 3 seed Texas A&M Texarkana Eagles. The Eagles were the Red River Tournament Champion with an overall record of 42-12. The remaining two teams in the Oklahoma City bracket are No. 1 seed and host school, Oklahoma City and the No. 4 seed William Woods (Mo).

This marks the first trip to the National Tournament for EOU since the 2018 campaign when the team received an automatic bid to Nationals after winning the conference tournament. This year’s squad has made some history as they have tied the the 1999 squad with the program record for wins in a single season with 41 victories.

Nicole Christian, third year head coach for the Mounties and member of the 1999 EOU Softball squad, will make her coaching debut at Nationals this season with hopes of surpassing the single season wins record she helped her team set. “We are so excited for this opportunity!” said an excited Coach Christian. “The girls have had a record setting year and getting this recognition is huge for EOU Softball and future Mounties to come! It is our time to make some noise at the national level! This is for EOU alumni, current players and newcomers! Once a Mountie always a Mountie, Mount Up!”

The 41st Annual NAIA Softball National Championship gets started on May 16th at 10 opening round sites across the nation.Culminating with the NAIA Softball World Series, beginning on May 26th at the South Common Softball Complex in Columbus, GA.

Information on Opening Round, game time and streaming info, will be made available at a later date.