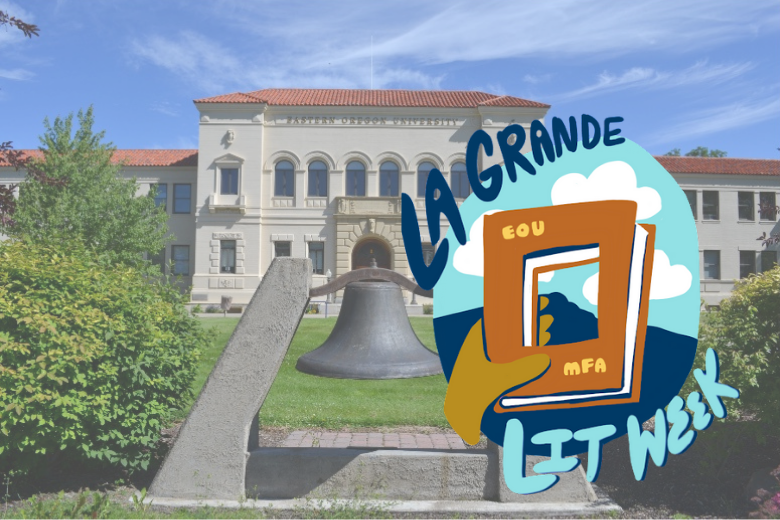 LA GRANDE, OR –(Release from Eastern Oregon University) Eastern Oregon University’s MFA Program in Creative Writing is set to inaugurate a La Grande Lit Week from July 17 to 23, offering a week of free literary readings, conversations and music in downtown La Grande by award-winning writers from the Northwest and beyond. One-hour writing classes with authors on EOU’s campus will also be offered for a registration fee of $20. The La Grande Lit Week will coincide with the MFA program’s annual summer residency.

“We’re really excited,” said Assistant Professor of English/Writing Nick Neely, an MFA faculty member and the primary organizer of the Lit Week. “It made so much sense to do this. We already bring a lot of literary talent to northeast Oregon each year in the form of our faculty. Why not invite even more writers and turn the residency outward to engage with the community?”

The week will kick off on Sunday, July 23, with a Lit Trail that will start at the Jewel Theatre in Elgin for a reading at 2 p.m. and finish with three readings and a panel in La Grande from 4:30-8 p.m. at JaxDog Café and Books, Liberty Theatre Cafe, and finally the patio of Side A Brewery. This year’s Lit Trail theme will be “Writing about Animals.” In addition to readings from MFA faculty members Claire Boyles, Nick Neely, and Molly Reid, two visiting writers will present new books: Bend-based science writer Marina Richie will read from “Halcyon Journey: In Search of the Belted Kingfisher” and humorist Michael P. Branch, a professor of environmental literature at the University of Nevada, Reno, will present “On the Trail of the Jackalope,” cultural history and exploration of one of the West’s greatest legends. A panel about animal writing that gathers all the Lit Trail writers will follow at Side A at 7 p.m.

“One goal with ‘Lit Trail’ is to capture some of the outgoing Fishtrap audience, offering them an extra night packed with programming in the region as they make their way back through La Grande,” said Neely. “Lit Trail will be kind of like a gallery walk, showcasing different downtown venues.”

Another design of the Lit Trail is to extend programming farther afield in the county. “We’ll start with an event in Elgin this year and hope to do even better next year,” said Neely.

Poetry will be the focus early in the week. On Monday, July 18, Shawnee poet Laura’ Da, winner of a Washington State Book Award, will read at Cook Memorial Library. On Tuesday, July 19, Lit Week will venture to nearby Morgan Lake for a “Poetry in the Pines” event featuring three poets including longtime EOU English/Writing professor David Axelrod, who directs the MFA program. Attendees are encouraged to bring a picnic and a camp chair.

At hq on Wednesday, July 20, Maine-based MFA faculty member Kathryn Miles will present her acclaimed new true crime book “Trailed: One Woman’s Quest to Solve the Shenandoah Murders.” An investigation into the killing of a lesbian couple in Shenandoah National Park, the book is more broadly an exploration of the perils women face in rural and wilderness settings and scrutiny of the National Park Service police.

Boise band Hillfolk Noir will keep Wednesday night going at hq. “We wanted to include music on a few occasions,” explained Neely. “Come for the reading, stay for the tunes.”

Fiction will come to the fore later during Lit Week. On Thursday, July 21, Spokane-based Leyna Krow will read from her new novel “Fire Season,” a mystery based on the Great Spokane Fire of 1889. Know willl read at Side A Brewery.

In addition to accomplished authors, Lit Week will present Writers to Watch. Ten graduating MFA students will read from their thesis projects, half before Jon Raymond’s reading and the other half on Saturday, July 22, in EOU’s Schwarz Theatre. “It’s not hard to imagine that many of these students will eventually be back for future Lit Weeks to present their own books,” said Neely.

For those interested in honing their own craft, nine one-hour community classes will be offered by Lit Week writers on special topics such as “Storytelling Science,” “Writing Toward Joy,” and “Demystifying Historical Fiction.” Anyone can register for these sessions for $20 via the Lit Week website: www.eou.edu/mfa/litweek. All classes will be held in Badgley Hall on the EOU campus.

Lit Week will conclude on Saturday, July 23, with an evening at The Local featuring memoirist-essayist Emilly Prado and her first book “Funeral for Flaca,’ winner of a Pacific Northwest Book Award. The book is a Chicana coming-of-age journey from California to Portland and is a part mixtape, with each chapter titled after a different song. Prado will spin a DJ set following her reading to end the week on a celebratory note.

“We’re thrilled to be able to partner with so many great venues in La Grande,” said Neely. “The idea is to show off this town and some of the best writing from the Pacific Northwest, our students’ work included. Hopefully, this first La Grande Lit Week will be the start of a long tradition that, like Fishtrap, will help bolster Northeast Oregon as a literary destination and inspiration.”

La Grande Lit Week is aided by a grant from the Union County Chamber of Commerce. For an outline of La Grande Lit Week events and brief author bios, please see this brochure schedule. To learn more about these authors and their latest books, see also this schedule with links to author websites and publisher descriptions of books.