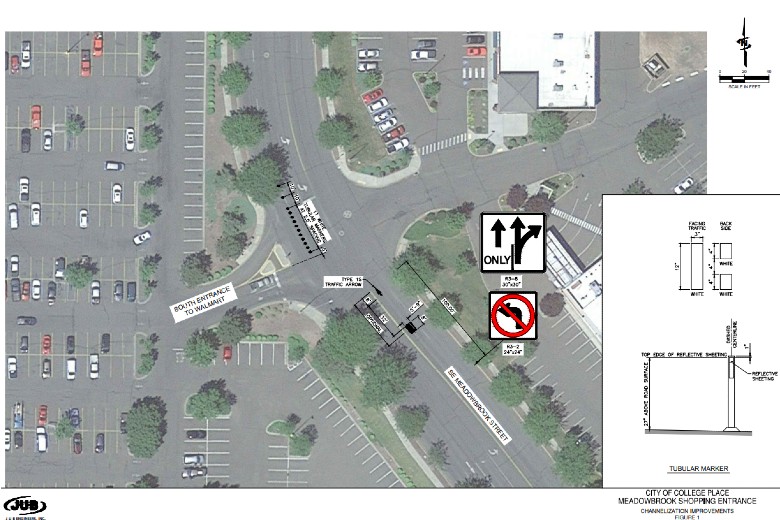 COLLEGE PLACE – The College Place City Council meets tonight (Tuesday) at 7 p.m. The council will consider a motion authorizing the installation of tubular markers, street signs, and pavement markings on Southeast Meadowbrook Street at the south entrance to Walmart.

While there is an island designed to restrict northbound traffic on Meadowbrook from turning left, as well as do not enter and no left turn signs, it is not uncommon for traffic to illegally turn left. There have been several accidents as a result. Public Works Director Robert McAndrews said installing tubular markers will guide traffic to continue north to the signalized intersection at Meadowbrook Street and Sydnee Lane where traffic can safely turn left into Walmart’s parking lot.

The total cost is expected to be about $3,400. However, nearly $2,000 of that is for the tubular markers. McAndrews said by utilizing the tubular markers removed from the Fourth Street cycle track the cost should be significantly less.

The council will also consider a request for additional loan funds in the amount of $225,000 from the state Public Works Board for the Mountain View waterline project. The PWB previously awarded the city a $617,000 loan. After bidding the project, the lowest bid was about $842,000, nearly $225,000 higher than anticipated. The higher costs are primarily due to increased material and labor costs.

Tonight’s meeting will be live streamed on the city’s YouTube channel and via Zoom. The meeting ID number is 816 2393 1590.