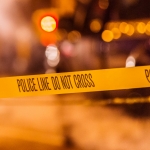 WALLA WALLA, Washington – The man who was killed in a motorcycle crash late Sunday night has been identified. The Walla Walla County Coroner’s Office says that Denis Rodin, 31, died of blunt force trauma to the head, neck and chest.

The first single vehicle crash happened at approximately 10 p.m. Sunday at the intersection of Taumarson Road and South Plaza Way. Walla Walla police report Rodin was driving his 2006 Honda CBR1000 too fast. He failed to negotiate the corner, and clipped the stop sign in the eastbound lane of Taumarson Road.

The intersection was closed for about four hours as police investigated the crash. A temporary stop sign is being used until the damaged sign can be replaced.

The second crash on Monday injured the driver who is identified as Steven K. Thompson, 48, of Walla Walla. Washington State Patrol reports he was traveling too fast when he failed to negotiate a turn, went off the roadway at milepost 313, and was ejected. The motorcycle was totaled.

Thompson was transported to Kadlec Regional Medical Center in Richland. WSP reports that he is being charged with second-degree negligent driving.