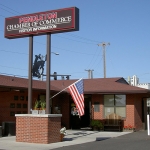 PENDLETON, Oregon – The top two office holders for the Pendleton Chamber of Commerce are thinking about changing the format and location of the First Citizens Banquet, which has been held at Wildhorse Resort in recent years.

Vice President Velda Arnaud says she and President Jennifer Keeton plan on suggesting the function be held at the Pendleton Convention Center, and creating a new format that would sell more tickets. At present, the event is limited to 450 people and it sells out quickly every year.

“You want everyone who wants to go to be able to go,” Arnaud said. “So, look at maybe changing the whole secrecy about who won what, and maybe doing more like the Oscars, where you have the top five.”

They say that having the nominees in the mix would create more ticket sales among their friends and family. So where will everyone sit? Keeton said that question is answered if it’s held at the convention center.

“Selling seats, like up in the stands,” she said is a possibility. “And, they are able to accommodate more people than they were before with their expansion.”

The two have not yet proposed the changes to the Chamber of Commerce Board of Directors.