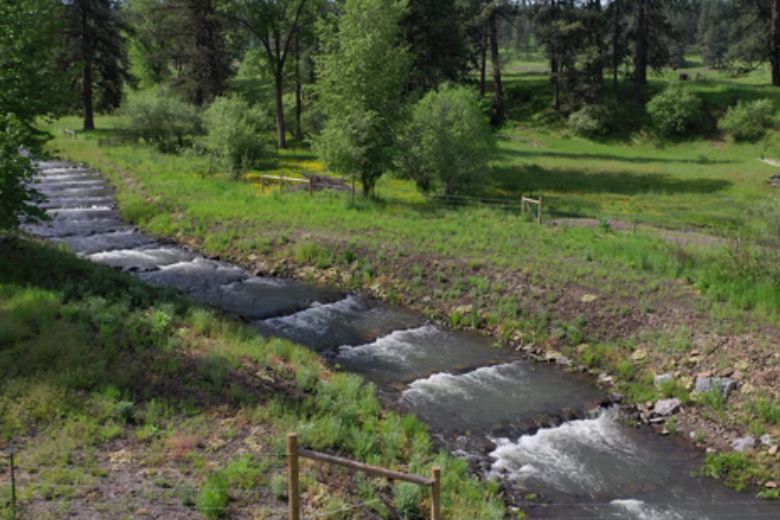 LA GRANDE – (Release from ODOT) In 2020, crews replaced the undersized culvert that connected Whiskey Creek to the Grande Ronde River under Oregon 244, about 12 miles west of La Grande in eastern Oregon. It was a challenging project, but worth it for many reasons. It turns out, others thought it worthy, too: the $1.4 million Whiskey Creek Culvert project has received a 2022 Environmental Excellence Award from the Federal Highway Administration. One other project in Oregon, near Klamath Falls, also received the federal environmental award.

The new 22-foot wide by 9-foot tall concrete box culvert provides seasonal access to over 15 miles of Whiskey Creek habitat for endangered species-listed Snake River Basin steelhead, trout and other fish species. Before, the failing five-foot diameter metal pipe was too small to handle high water flows, resulting in frequent flooding over the highway. It also impeded fish passage between the river and the creek because of the high velocity during high flows and steep jump heights during low flows.

It made sense to upgrade the culvert, but putting it in wasn’t an easy effort.

“There were several complications with a project of this size,” said ODOT Environmental Coordinator Paul Kennington. “We had wetlands, waterways, an archeology site, and temporary water management we had to do. And, we needed to make sure all that happened in one construction season.”

Overcoming those challenges is one reason the project stood out. For example, crews had to reroute a portion of the streambed to create a better connection to the Grande Ronde River.

To help migrating species on their return journey upstream to spawn, the project team also enhanced a portion of the creek with weirs to create a fish ladder effect.

“Despite being fairly complex, this project was real success,” Kennington said.