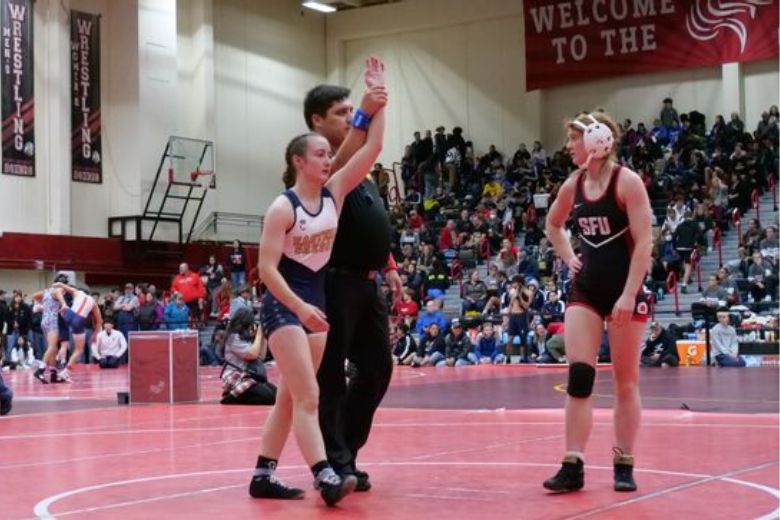 LA GRANDE – (Release from Eastern Oregon University) The Mountaineers were back in action Sunday as they traveled to Spokane, Wash. to compete in the Spokane open. It was a big day of the mat for the Mounties as 10 EOU wrestlers placed over five weight classes.

In the 109-pound division the Mounties had two placers. The top placer was Nayeli Flores Roque who took third place. Roque went 3-1 on the day with her only loss coming against the eventual first place finisher in the division, Mia Zuniga who wrestled unattached. The second placer in the 109-pound division for the Mounties was Veronica Arroyo. Arroyo went 2-2 on the mat in her route to a fourth-place finish in the division.

In the 123-pound division the Mounties were dominant. Taking the top three spots on the podium it was Stephanie Blankenship that walked away on top. Going 4-0 on the day, Blankenship defeated Aleyda Rodriguez of Grays Harbor College in her first matchup of the day by tech fall. Blankenship followed with a pin at the 1:18 mark then she entered the semifinal match against fellow Mountaineer Paige Chafin. Blankenship took the match by 6-5 decision leading to a championship matchup with fellow teammate Sierra Gonzales. Blankenship ultimately took the top spot on the podium, winning the final match by pin at the 2:28 mark. Gonzales’ efforts tabbed her second and Chafin was able to finish 3-1 on the day, tabbing her the third-place spot.

For the 130-pound division Eastern was able to fill two spots on the podium. Kaylee Moore, finishing first in the division, had a dominant day. Going 4-0 on the day, Moore won her first-round matchup by pin at the 2:41 mark and her second round by forfeit. She then was able to pull out a 8-4 decision in her semifinal match leading to a dominant 10-0 technical fall victory tabbing her first place on the podium. Moore was accompanied by fellow Mountaineer Brooke Cicierski on the podium. Cicierski finished fourth, going 2-2 in the tournament.

Morgan Shines was the lone Mountie to place in the 136-pound division. Placing first, winning the division, Shines had another dominant day on the mat. Winning each of her first three matches of the day by technical fall, Shine took on Grace Miller of Grays Harbor in the championship. Shines ultimately won the match 3-0, completing a clean sweep on the day where no points were awarded to their opponents in any of their four matches.

For the 143-pound division the Mounties found another champion. Eastern’s Liv Wieber took the top spot in the division after a dominant 3-0 performance. Wieber started the day with a bye, then it was three consecutive pins that carried her to a first-place finish. Weiber was not alone on the podium as fellow teammate Madelyn Mazemke finished sixth after a 2-2 day on the mat.

Eastern will be back in action Friday, Dec. 2 as they travel to Great Falls, Mont. to compete in the Battle of the Rockies.